As an affiliate, we earn from qualifying purchases. We get commissions for purchases made through links in this post.

Fog machine smoke can be colored using colored light or by burning or spreading powder into the air. Lighting the fog with colored lights is the quickest and easiest approach to creating colored smoke. Fog appears to take on the same color as the light it reflects.

This article will look at the best ways to create amazing fog effects and enlighten you on the dos and don’ts of fog machine smoke coloring. Stay tuned for some amazing nuggets and tips!

A professional fog machine can be damaged if you add food coloring, dye, or other additives to the dry ice or fog juice. No matter how many colors you add, the fog will still roll out white or clear because the colored particles are too big to spread throughout the fog.

Ultrasonic wave humidifier guide | How to use | Michael's Hut

The only way to get colorful smoke is to use colored lights to illuminate the fog. Reflecting the light, the fog appears to take on the same coloring.

Fog machines are devices that transform fog fluid into aerosol form. Fog fluid droplets are all that’s needed to create the stunning effects you see in movies.

Although these drops are not white, they are transparent. Reflecting the light that shines on them, most often white, they appear to be white.

So, in order to achieve spectacular fog effects, you must shine a colored light on the clear fog particles. Instead of normal white light, they will reflect the colored light instead.

Solid particles of smoke can be used to create a fog-like appearance that is colored to match the surrounding environment. This can be performed by burning powder or scattering powder into the air to create a cloud of smoke.

What is the Purpose of Colored Fog?

When colored fog is used, one of the most important motives for doing so is to produce a striking and dramatic impression.

Another reason to incorporate color into your fog machines is that many live entertainment venues have certain lighting and stage requirements when they host performances.

Colored smoke provides you with a great deal of freedom and variation in satisfying these requirements. You may also produce great party memories with your friends and family, thanks to colored smoke.

What is the Best Method to Include Colored Fog into Your Event or Party?

Fog machines are the most widely used special effects devices at a wide range of events, including performances, festivals, weddings, and even theater productions.

Using colored smoke, you may create dynamic atmospheric effects on stage or have them managed by an operator to enhance any event.

Colored fog works best when it’s dense and opaque enough to see forms through but not so heavy that people are unable to walk through it comfortably.

The Optimal Conditions for the Production of Colored Fog

Increase the temperature of your heaters or use less fluid/ice if you want denser vaporization. If you want to get thinner, you should do the polar opposite of what you normally would.

If you plan to use your fog fluid indoors, make sure that it is non-toxic and safe to breathe in before utilizing it. Any items containing oil or petroleum-based additives should be avoided.

When it comes to gatherings or parties, the “wet” form of the fog machine is the most commonly used because it requires less maintenance and is safer to use around people and pets.

In addition, an LED light is included with the unit. Generally speaking, these fog generators use a heating element immersed underwater within a big tank filled with liquid glycol, which, when heated up, evaporates into dense clouds.

If your fog machine has an internal exterior fan, make sure you do not obstruct the airflow from it.

Using a fog machine with built-in LED lights to create colorful haze for your party is the simplest and most up-to-date method.

This is the simplest method for novices to get colorful smoke. Fill the fog machine with fog fluid, turn on the machine, and select a color. 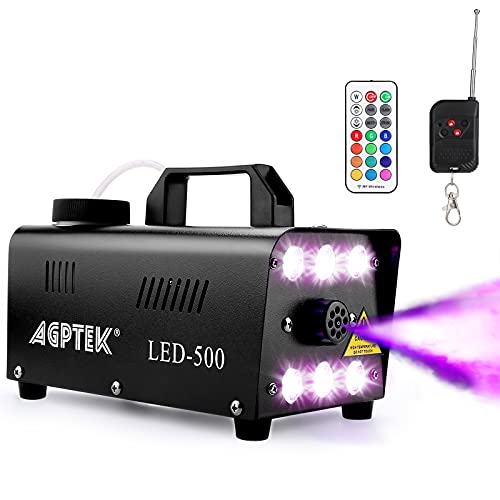 This fog machine's most notable feature is that it may operate independently of the lighting effect. Thus, the stage performance can be given a unique and special lighting effect on various occasions, such as events such as weddings, Christmas, and concerts, thanks to the inventive design.

There are 13 different colors and a wide variety of lighting effects to choose from with the AGPTEK Automatic Spray Smoke Machine. Color fading, flash, sharpness, and single display are a few of the effects available.

The speed of the fog machine's effects can be adjusted. Within a range of 2-3 meters, the AGPTEK Automatic Spray Smoke Machine can produce non-toxic fog at a rate of 2000 cubic feet per minute.

When it comes to quickly and easily generating colored smoke, the LED light fog machine method tops the list. Simply add some fog fluid to your machine and use the remote to select a color.

If you do not have a remote with your fog machine, this will help.

The good news is that non-colorful smoke may also be produced using LED fog machines. Do not be tempted to add dye or food color to your fog juice, as this will damage the fog machine and not give you results.

I recommend checking out “How to Make Low Lying Fog Juice.”

Please be careful and use at your own risk
None of the authors, contributors, administrators, or anyone else connected with Wild Fog, in any way whatsoever, can be responsible for your use of the information contained in or linked from these web pages.

Can You Put Food Coloring in a Fog Machine?

Ready to have some amazing ground crawling fog effects for the next Halloween party? I bet you want to take it to the next level and create that fog with a cool color! Well, how easy is it? Can we just add dye? Let’s find out! You can’t add food coloring to a fog machine….

Can You Use Snow Machines Indoors?

Snow machines are a popular way to create a winter wonderland at events and parties. But can you use them indoors? You can use snow machines indoors, but there are a few things you need to take into consideration. The main thing is the ventilation in the room. You also need to be aware of…